All the persosns who need such support please contact at bialorus.studium@uw.edu.pl 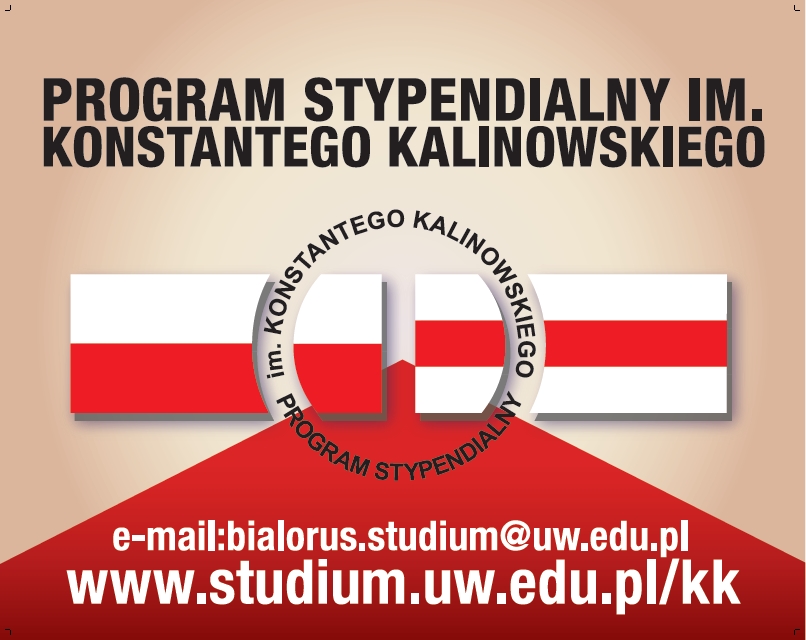 The government-sponsored Konstanty Kalinowski Scholarship Program – under the patronage of the Polish Prime Minister – is the largest program in Europe that lends assistance to young Belarusians unable to study in Belarus due to their political views.

The elections on 19 March 2006 in Belarus led to mass protests and, consequently, to large- scale arrests and mass repressions against opposition activists. The program was created due to the immediate response to events in Belarus by the Polish government and authorities of Polish higher education institutions. On 30 March 2006, Prime Minister Kazimierz Marcinkiewicz and Alaksandr Milinkievič, representative of the United Democratic Forces of Belarus, as well as university rectors representing the Conference of Polish University Rectors (KRUP) and the Conference of Polish Academic School Rectors (KRASP), signed a Letter of Intent at the University of Warsaw. As a result, a previously unforeseen opportunity to educate new Belarusian elites in a democratic and European spirit was made possible.

The patron of the newly created Scholarship Program became Konstanty Kalinowski (1838-1864) – he took part in the January Uprising and was the plenipotentiary of the insurgent government on the territory of the Grand Duchy of Lithuania. He was later executed in Wilno He is remembered as a defender of Belarusians and their culture and continues to be widely respected among Belarusians. The program is attached to the Centre for East European Studies UW.

As of 2015, 206 students study under the auspices of the Konstanty Kalinowski Scholarship Program and 273 individuals have graduated the program. In 2012, the first reunion and conference of scholarship graduates took place in Warsaw. The second reunion took place in Białowieża in 2014.

by the Ministry of Foreign Affairs in 2016