Publishers: Centre for East European Studies and The Common House of Caucasus in Poland

The main inspiration for the journal were titles such as “Promethee” and later “La Revue de Promethee”, published in Paris in the period 1926-1940 and supported by the Polish government. Although the pre-war Prometheism is, for obvious reasons, not actual in its original sense as an ideology and political practice, but may still constitute a model for the development of research and popularization of the knowledge about Eastern Europe, Central Asia and Black Sea. “New Prometheus” may also serve as a platform for dialogue between scientists and experts from countries of the region.

On the pages of New Prometheus we conduct a double-track research. On the one hand we will concentrate on the contemporary issues concerning politics, economy and culture, focusing on relations between states and nations as well as on challenges ahead of them. On the other hand we are a source of knowledge and a place of debate concerning historical issues.  In New Prometheus we  publish records of debates with participation of people presently engaged in Polish Eastern policy as well as scientists and politicians from the countries of our region.

Journal New Prometheus is addressed not only to Polish readers but to everyone who take keen interest in the subject matter covered by us. That is the reason why we decided to publish articles not only in Polish but also in English and Russian. 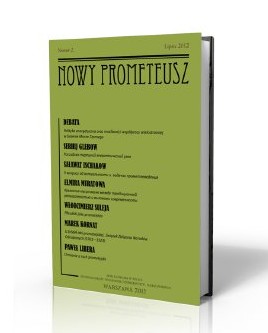 PhD student of the Oriental Faculty of the University of Warsaw, graduate and employee of the Centre for East European Studies UW, board member of the Common House of Caucasus in Poland. Her field of research is modern history of Georgia, especially the history of dissident movements in 1970s and 1980s.

analyst at the Centre for Eastern Studies. Graduate of Ukrainian Philology as well as the Centre for East European Studies UW. Previously he worked as a journalist in the Ukrainian Section of the Polish Radio for Abroad and cooperated with the NGO sector.  His field of interest is actual situation in Ukraine, especially foreign policy and media.

President of the Common House of Caucasus in Poland, initiatior and pirst editor-in-chief of Nowy Prometeusz. Her main field of research are massmedia in the post-Soviet area, contemporary social phenomena, theory of sociology.

PhD student at the Institute of History University of Warsaw, earned his PhD at the Dragomanov University in Kiev.   His field of research is the role of Turkey in the promethean movement’s activity.

Academic Board of „Nowy Prometeusz”